Now you can introduce into your practice, a compliment of completely new cupping techniques and a host of new applications for cupping using a superior range of non - flame cupping instruments.

In the Modern Cupping Therapy Workshop we use flexible silicone cups (the superior cups for facia release), Australian hand-crafted facial and bells cups and Haci magnetic cups to perform all of the new non-flame cupping practices.

All the practices presented in Modern cupping are original and unique Health Traditions innovations. They are the result of 40 plus years research into the subject and made possible by the new tools we acquired. Read the essay Mending the Fascia with Modern Cupping for full details about the lasting success and logic behind using silicone cupping vessels to restore discordant fascia.

"I think that cupping is uniquely positioned to directly affect the superficial fascia and is better at achieving a positive change than any other technique I currently know of. I thoroughly recommend Bruce's work."Kit Laughlan
Author and developer of Stretch Therapy

In the 2 days of Modern Cupping Therapy you will learn:

Massage therapists, acupuncturists, osteopaths, physiotherapists, and all other practitioners dealing with soft tissue syndromes and myofascial problems - including practitioners who perform mobile services or do corporate massage involving seated treatments - will find this workshop very informative and practical.

Introduction to Modern Cupping, including it's aims and how it came about, as well as a discussion on the fascia. Students have the opportunity to ask any questions

1. Demonstration on how to apply silicone cupping vessels and different vacuum levels to treat different presentations.

2. Demonstration of treating the neck, shoulders, back and arms and intercostal region. Including stretches, mobilizations and the benefits of liniments in conjunction with treatment.

Discussion and demonstration on diagnosing and treating hip pain due to fascia distress using silicone cupping vessels to perform the 'Mending the Fascia' method.

Discussion and demonstration of facial cupping

Two of the many Facebook Health Traditions Modern Cupping Posts

Remodelling the fascia to correct hip pain and immobility

It's difficult, unless at hand, to appreciate the value of any therapeutic intervention, including cupping, unless some of the gains are for all to see. This series of photos were taken during an HT Modern Cupping workshop in Sydney. They portray the benefits of using flexible silicone cupping vessels to remodel the superficial fascia and release trigger and acu-points, to achieve increased flexibility and mobility, and provide pain relief throughout the hip region.

After consultation with the group of students in attendance, the person who was most in need volunteered to receive treatment. She said her right hip was her most problematic side. I would like to make it clear that before these pics were taken, no other treatment of any type had been performed. Commentary, in brief, proceeds from the upper left pic and clockwise.

1. Diagnosis by palpation to check the condition of the superficial fascia.

2. Stationary cups are applied to the left hip, to benefit the secondary problem region, and in turn release the deeper aspects of the right hip. Note also the aqua cup placed on the trigger point of the quadratus lumborum m. and the clear cup insitu, above infraspinatus m. (and clearing blockage at Tianzhong, SI 11). This diametrically opposite location on the left side aims to release the right-sided gluteus maximum m., and specifically Huantiao, GB30, according to the time-tested centuries old traditional Chinese medical strategy of treating polar opposites. There is also a corollary of sorts relating to a neurophysiological criss-cross mechanism.
Once these are in place, the "mending the fascia" method is applied to the featured hip.

3. Rectifying the fascia with the "snail's pace" sliding cup method. Note the active impression of the course of the cup.

4. Pressing down on the rim of the cup - close to the tat, and the two small cups applied bilaterally beside L5 to release the complex of adjoining ligaments - to dig in and then be drawn laterally to release the binding tightness of the glut max attachments engaged at the sacrum.

5 & 6. Pre and post treatment demonstration of the flexibility of the hamstrings. I do note a bend in the knees in pic 6, although the feet are positioned closer to each other.

7 & 8. Significant improvement, dependent on the release of quadratus lumborum m. and complimentary surrounding fascia is demonstrated. What we can't see is the report from the recipient about her immediate sense of pain relief and freedom of movement, when she walked around the room after treatment. 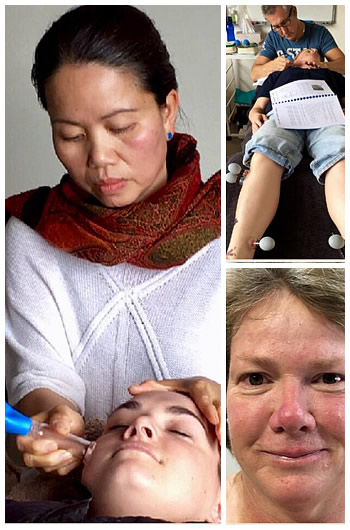 Although gentle cupping to the face has been in vogue for decades among beauticians in Japan and Germany, after learning the basics I was left thinking so much more might be achieved.

Firstly, even if facial rejuvenation is the goal, surely it would be so much better if this local treatment was expanded by also adding to the health of the whole body. Who reading would disagree that one always looks one's best when feeling healthy? Sure creams etc may help the face, but nothing works better than when the entire body is feeling good, right?

So it was devised that before treating the face, other cups should be strategically placed on distal acu-points for this purpose (see the upper right photo). These distal points, especially on the legs, have a 'grounding/earthing' effect and bring about a total sense of relaxation. Also via the channels the relaying of Qi to the face brings an exponential gain to the focus area.

My second thought entertained the possibility of treating any number of troubling facial conditions. I can report that after many trials, excellent improvements can be gained for certain dermatological conditions including pimples, acne and rosaea. Note in the lower right photo (untouched) - taken after the first session and when only the right side had been treated - how well the heat (redness) and tightness has been relieved. You might be thinking, oh no (!) not for rosaea (broken capillaries), but it is none other than stasis, and very soft cupping can disperse such blockage.

Remember, one of the fundamental benefits of cupping is to move stagnation.

In addition, when treating heated dermatological conditions, beforehand at the first stage of treatment, cups should be applied to the back and slid (moved) up and down the bladder channel to drain and release systemic excess... expect to get strong red lines as a show of this heat release.

Other conditions including mild headache, sinus problems and Bell's palsy can also be alleviated.

Upon satisfactory completion of the Master Class in Traditional East-West Cupping and the Modern Cupping Workshop an Advanced Certificate In Integrated Cupping Therapy will be awarded.

I think that cupping is uniquely positioned to directly affect the superficial fascia and is better at achieving a positive change than any other technique I currently know of. I thoroughly recommend Bruce's workKit Laughlan
Author and developer of Stretch Therapy

As a current massage therapist for the first grade National Rugby League, as well as for International Cricket events including the recent Indian Premier League tournament in South Africa (by recommendation from Julia Russell/physiotherapist), I have always relied on the therapy 'traditions' that the sports industry practises. My favoured technique being Myofascial Release, is practical and effective but can be time consuming. The 'Modern Cupping Therapy' course, for me, reflected many parallels with MFR that are less time consuming and equally as effective...if not more!! Thank you Bruce for opening the imagination and making things easierRod Parry
(Brisbane)